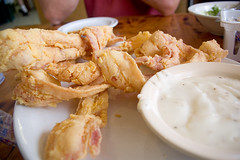 1. What did you do in 2008 that you'd never done before?
Got married. Hard to top that for a new experience.
Although I did cover a Super Bowl.

2. Did someone close to you give birth?
Dawn did. Hiya, Kate.

3. Did anyone close to you die?
Yes, the father of a good friend.

5. What would you like to have in 2008 that you lacked?
Employment with a stable employer, in a stable industry.
And a tone of voice, when reciting my wedding vows, that didn't sound, as a friend later noted, like I was being sworn into office.

6. What date from 2008 will remain etched upon your memory, and why?
April 19. Because the Suns forgot to rotate on a wide-open Tim Duncan, even if he was standing at the 3-point line.
Oh, and I got married.

7. What was your biggest achievement of the year?
Helping plan a wedding that some people said was the best they'd ever attended.

8. What was your biggest failure?
Getting out of my industry when the getting was good.

9. Did you suffer illness or injury?
Bad cold the day after the Super Bowl, another cold in September.
And I somehow ganked my left shoulder sleeping in my parents' gets bed a few days before the wedding.

10. What was the best thing you bought?
All expenses related to the wedding, even if we did end up with 20 pounds of excess M&Ms afterward.

11. Whose behavior merited celebration?
Gotta give it to the prez-elect. Never seen a cooler cat on a bigger stage.

12. Whose behavior made you appalled and depressed?
GOP partisans during their party's death throes.

13. Where did most of your money go?
Wedding. And in the wedding, most of the money went toward the caterer, which was totally worth it.
Seconds on corn bake?
Coming in second was the honeymoon.

15. What song will always remind you of 2008?
"Love Song" by Sara Bareilles.
During the wedding prep in early '08, the radio station we listened to on my folks' house had that in heavy rotation. I hear the opening bars, with the pounding piano, and immediately think I've got to move some tables, or trim a tree.

16. Compared to this time last year, are you:
i. happier or sadder? Sadder. The drama at work, my job and hers, took its toll.
ii. thinner or fatter? 'Bout the same.
iii. richer or poorer? Poorer.

17. What do you wish you'd done more of?
Job searching.

18. What do you wish you'd done less of?
Freezing up when things got bad.

19. How did you spend Christmas?
At the office, finishing up the light rail package.

20. Did you fall in love in 2008?
Well, I was already in love, but marriage certainly upped the ante.

21. Places you vacationed?
The California coast, LA to SF. Nothing like it.

22. What was your favorite TV program?
Sports: Suns and Dodgers games.

23. Do you hate anyone now that you didn't hate this time last year?
Can't think of anyone.

24. What was the best book you read?
Blood and Thunder: An Epic of the American West
How Kit Carson tamed the Navajo.

25. What was your greatest musical discovery?
Silversun Pickups, for "Lazy Eye."

26. What did you want and get?
Wanted Emily's hand in marriage. Got it!
Wanted to throw a good, low-key wedding. Got that, too!

27. What history did you witness up close?
Manning-to-Tyree's helmet.

30. What one thing would have made your year immeasurably more satisfying?
Job stability.
And more money.

31. How would you describe your personal fashion concept in 2008?
A killer suit and sweet shoes, worn once.

33. Which celebrity/public figure did you fancy the most?
Obama.

34. What political issue stirred you the most?
All facets of the election.

35. Who do you miss?
Manny Ramirez - it was like having Superman suddenly show up on you favorite team and lift them to the playoffs.

36. Who was the best new person you met?
Dunno.

37. Tell us a valuable life lesson you learned in 2008:
Marriage is work, but well worth it.

38. Quote a song lyric that sums up your year:
Oh yeah, I´ll tell you something
I think you'll understand
When I say that something
I wanna hold your hand

Congrats, Phillies. This was no fluke, as you're the better team.
As for my Dodgers, I am unsure as to how I feel about their elimination. More accurately, I am unsure why I do not feel as a long-time fan should.
Looking at the whole season, I have to say there was an element of unreality to it.
For 3-1/2 months, watching this team was agony on a nightly basis. The Dodgers weren't bad enough to be counted out from contention in an awful division, but not good enough to overcome the slightly less-worse D-backs. For weeks on end, it seemed, LA was about four games out and going nowhere.
A mid-July series win at Arizona pulled the Dodgers into a tie and put a charge into my hopes, yet the team seemed ready to spit the bit at any moment.
Then came the Manny trade. What nobody will remember is that LA lost 15 of its first 26 games with him in the lineup. Yes, he was smacking the crap out of the ball and single-handedly had dragged the team back into the national media's spotlight but... so? We still sucked.
Now, it's unlikely to have a team make a stretch-drive push without another club making a stretch-drive fade. And, living in Phoenix, I watched both unfold simultaneously - Snakes on TV, Dodgers on the computer. From Aug. 29 until the afternoon of Sept. 25, there was a nine-game swing in the standings. LA went 18-5 while AZ stumbled to a 10-15 record.
And that was the unreal part, continuing into the NLDS. My team turned into world-beaters overnight, but with the same players (save for Manny and Blake) that had done nothing but play mediocre ball for the better part of a season. When Furcal came back for the playoffs, that cemented within me a feeling of Who are these guys?
That's why I couldn't celebrate too much when they advanced in the playoffs for the first time in 20 years. And that's why I can't feel more than a slight sense of disappointment tonight. This team became unfamiliar and foreign just when my bond should've grown strongest. I've been following baseball since 1985, and I've never experienced anything like it.